SOME FAVORITE QUOTES FROM BOOKS:

“It was night again. The Waystone Inn lay in silence, and it was a silence of three parts.”

― Patrick Rothfuss, The Name of the Wind

“He was one of the fortunate ones: he’d emerged from childhood a whole person, and his past wasn’t some vast, unmovable mass with its own weather system.”

“The officer of the court was a good old boy with a meaty backwoods beard and a hungover wobble to his step.  He’d outgrown his shirt and the pressure against the buttons made him look upholstered.  But he was a white man with a pistol so despite his dishevelment he sent a vibration.”

“I got drunk that night, banjoed drunk, drunker than I’d been in about fifteen years.  I spent half the night sitting on the bathroom floor, staring glassily at the toilet and wishing I could just throw up and get it over with. The edges of my vision pulsed, sickening with every heartbeat, and the shadows in the corners flicked and throbbed and contorted themselves into spiky, nasty little crawling things that were gone in the next blink. Finally, I realized that. while the nausea showed no sign of getting better, it probably wasn’t going to get any worse.  I staggered into my room and fell asleep on top of the covers without taking off my clothes.”

― Tana French, Into the Woods

“A sunrise threatened Dani’s chest, but she shoved it down, barely wincing when the heat stung her palms. They were co-conspirators, after all. They were in the midst of a plot. A plot that required Zaf to to around her, and do nice things for her, and look at her with eyes like fire gleaming off midnight water.”

“It takes years to write a book⎯between two and ten years. Less is so rare as to be statistically insignificant…

Faulkner wrote As I Lay Dying in six weeks; he claimed he knocked it off in his spare time from a twelve-hour-a-day job performing manual labor. There are other examples from other continents and centuries, just as albinos, assassins, saints, big people, and little people show up from time to time in large populations. Out of a human population on earth of four and a half billion, perhaps twenty people can write a serious book in a year. Some people lift cars, too. Some people enter week-long sled-dog races, go over Niagara Falls in barrels, fly places through the Arc de Triomphe. Some people feel no pain in childbirth. Some people eat cars. There is no call to take human extremes as norms.”

“It is perfectly okay to write garbage – as long as you edit brilliantly.”

“Fiction is the truth inside the lie.”

“You never have to change anything you got up in the middle of the night to write.”

“You can always fix crap.  You can’t fix a blank page.”

Hollie Smurthwaite is the paranormal romantic suspense author of The Color of Trauma and The Color of Betrayal.

Whenever people ask me about having lunch/tea/a dr

Although the whole pilgrims and Indians aren't-we-

Although I wouldn't exactly call it a fall book, i

Writing is a mostly solitary activity, but I'm luc

It's important, I think, to keep yourself laughing

The Muse and the Knight in repose.

Happy Veterans Day to all who are serving or have

All my books (okay, my two books so far) are set i

One of my latest craft books! Well, craftish book.

We live in a visual age. Want to know if The Color

Happy Dia De Los Muertos! It's the day of the dead

And today another book was born. May she live long 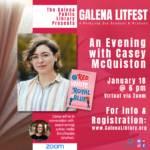